Amid an atmosphere full of joy and cooperation, Syrian farmers harvest wheat crops

Damascus, SANA- Sparkling golden wheat spikes narrate stories about the relentless efforts exerted by Syrian farmers for cultivating their farmlands with wheat which is one of the most important strategic crops to guarantee the food security for the Syrians.

Under the harsh heat of the sun, and despite the great physical efforts made by the farmers, one can hear their laughs mixed with wonderful scene of the bright yellow-gold wheat spikes. They are overwhelmed with happiness and indifferent about the hard work and effort they make. 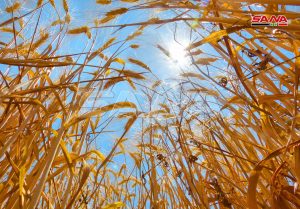 That picture was clear in al-Darkhabyieh town in al-Kiswa in Damascus countryside, where men, women and children gathered for the wheat harvest season, which has been on the throne of crops for thousands of years amid an atmosphere full of cooperation, love and familiarity.

The happiness surrounding the farmers, which was documented by the SANA camera during its tour in the town’s fields, eliminated the fatigue which resulted from cultivating the crops throughout the year and despite the measures taken to address the Coronavirus, which changed the life of the world, Syrian farmers have continued their hard work to harvest the in various ways, whether manual or modern.

Mahmoud starts his journey to harvest the crops from Hama central province where he lives to Damascus and Daraa and most Syrian provinces. 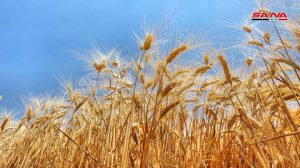 He says “The wheat harvest season comes in the beginning of each summer and it brings with it the joy, generosity and goodness, as the family meets with its elders, men, women and even young children as they meet in wheat fields during the harvest season to help each other.

Ibrahim, a harvester driver for more than 14 years, spoke to us about his new combine harvester, which was recently secured to Syria, a machine that separates wheat grains from straw that turns it into hay, stressing that his profession has special peculiarities as he inherited from his father since childhood.

The harvest season usually begins during May each year, when the wheat and barley kernels ripen after the yellowing of their ears, so farmers harvest them either by mechanical combine harvesters or by hand machetes and others help them collect the harvested spikes and they work to stack them in the form of small hills to be transported to threshing floors and then they grind them with threshing machine that separate wheat and barley from straw. 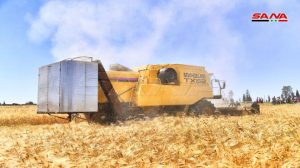 Although is no place for the manual scythe among the advanced machines that save farmers their time and effort, some fields still use it during the harvest season, according to the farmer Maryam Ibrahim who stresses that she uses the scythe to harvest the wheat ears, as it is the best and cleanest way to harvest the crops, while Walid al-Shamali asserts that, despite the trouble during the harvest process, the scythe remains the machine which have been used by the ancestors over long years.

The harvest season is considered as a ritual by the Syrian peasants who haven’t not hesitated to carry arms to defend their country and their land and harvest their crops with the same hand that carried the sickle tirelessly. 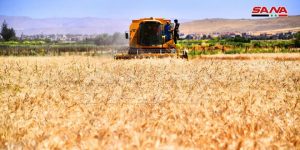 The Syrian peasants have been sowing wheat and waiting for it to be harvested and collected so that successive generations could live from it and they can secure Syria’s needs and face the unfair coercive measures imposed on the country by a number of Western countries on Syria, according to a member of the Executive Bureau of the Damascus Agricultural Union, Abdel Elah Tarshan.

Head of Damascus Agricultural Association, Nasser al-Haboud, stated that there are daily field visits to the wheat fields to follow up the harvest process, and to get acquainted with the farmers’ needs during the harvest period, and work to secure all of them.