Lattakia, SANA- Representing President Bashar Al-Assad, the commander-in- Chief of the Army and armed forces, Presidential Affairs Minister, Mansour Azzam, participated on Wednesday in a festival held by the Russian Forces Command in in Syria at Hmeimim base, marking the 75th anniversary of the Victory over Nazism in World War II.

Azzam, in a speech at the Festival, conveyed president al- Assad’s congratulation on the occasion of victory over Nazism and fascism in World War II, which was obtained by the great achievements and the sacrifices that were offered. 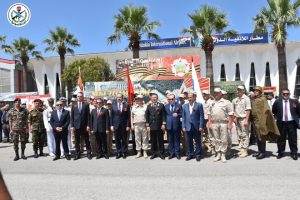 He affirmed that the Syrian people highly appreciate the honorable Russian stances and their support  in the fight against Takfiri terrorism, in addition to Russia’s public and clear support to the Right and international law and stop taking the Security Council as hostage or platform for any blatant interference in the domestic affairs of sovereign countries.

Minister Azzam pointed out to the importance of Russian direct military participation alongside with the Syrian Arab Army in the face of armed takfiri terrorism, and the decisive role played by Russian friends in eliminating Daesh, Jabhat al-Nusra and the rest of armed terrorist organizations, as well as the Russian role in liberating wide areas of Syrian territory where terrorism was positioned and restoring safety and security to many areas in more than one province.

He stressed the Syrian Army’s determination to continue carrying out its national and constitutional duties in defending safety of Home and civilians until the liberation of the last inch of the Syrian territory from terrorism and its supporters.

The festival included a military parade in which Syrian and Russian military units took part in, and a show for the equipment and weapons , in addition to honoring a number of Russian and Syrian officers and soldiers in appreciation for their great efforts in countering and eliminating terrorism.