Protests against Turkish occupation and its mercenaries in Ras al-Ayn, Tal Abyad, Sulok

Hasaka, SANA- The people of Ras al-Ayn, Tal Abyad, and Sulok on Monday organized protests against the Turkish occupation forces and their terrorist mercenaries. 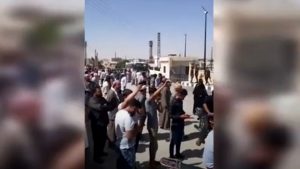 Civil sources told SANA reporter that dozens of locals from the cities of Ras al-Ayn city in Hasaka northwestern countryside, Tal Abyad in Aleppo northeastern countryside, and Sulok in Raqqa northern countryside held protests against Turkish occupation forces and the terrorists affiliated to them.

The protestors condemned the criminal practices of the Turkish occupation and its mercenaries against locals, which include burning wheat and barley crops, seizing properties and houses, forcing them to use the Turkish lira, and raising the price of bread, all in order to force them for leave their houses and areas.

The protests included the closure of stores and refusal to use the Turkish lira.