The two sides discussed the Russian-Turkish agreements reached on March 5th and the constant breaches of them by terrorist organization, focusing on the mechanisms of implementing these agreements which involve keeping terrorists 6 km away from the Aleppo-Lattakia International Highway (M4) in order to reopen it. 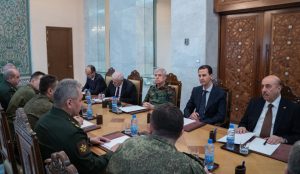 President al-Assad and Minister Shoygu also discussed the situation in the Syrian al-Jazeera area and the continuing theft of Syrian petroleum and resources by the United States, as well as discussing the steps taken by the Syrian state to restore security and stability across the country, and the Russian leadership’s efforts on the regional and international levels to break the embargo and lift the sanctions and isolation imposed on the Syrian people.

The two sides were in agreement on the joint policies and steps to be taken in the coming stage.

Talks also touched on the cooperation between the establishments of the two countries Ministries of Defense and Armed Forces, with the two sides expressing commitment to continue improving this cooperation.

The meeting was attended by Deputy Commander-in-Chief of the Army and Armed Forces, Minister of Defense Gen. Ali Abdullah Ayoub, and Chairman of the National Security Bureau Maj. Gen. Ali Mamlouk.