Aleppo, SANA – A governmental team headed by Prime Minister Imad Khamis started a visit to Aleppo province to issue an economic and services plan for the liberated areas and to follow up on the implementation of the ongoing governmental projects, in addition to holding the weekly Cabinet session there. 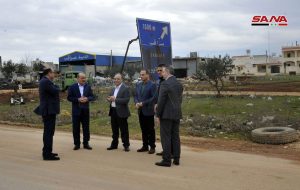 The delegation started by inspecting the situation in Ma’arat al-Nu’man, Saraqeb, and al-Zarba areas which had been liberated recently by the army, with the Prime Minister saying that the coming period will witness intensive efforts to rehabilitate these areas.

Khamis visited also the International Center of Agriculture Research in Dry Areas (ICARDA) and examined the damage caused to its facilities.

In the liberated area of al-Zarba, the Prime Minister was briefed by representatives of the education sector on the situation of the damaged schools in the area and the requirements for rehabilitating them.

In the same context, Khamis visited the headquarters of Ebla Private University on the Aleppo/Damascus International Highway, where he was briefed on the scale of the damage caused to the University during the years of the war. 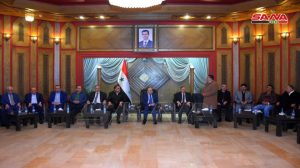 In the Aleppo Governorate building, Khamis reviewed with People’s Assembly members from Aleppo the necessity of joint work to develop the province.

The Prime Minister clarified that the government’s plan concentrates on achieving balanced development between cities and rural areas, as well as restoring the governmental facilities in the liberated areas including schools, medical centers, police stations, and services facilities in preparation of the return of residents, in parallel with providing the requirements for putting the stalled industrial facilities into service.