Sabbagh: Nuclear security is a serious issue that demands the international community’s attention

Sabbagh: Syria spared no efforts to stand by the Palestinians to restore their rights

Vienna, SANA – Permanent Representative of Syria at the International Atomic Energy Agency (IAEA), Ambassador Bassam Sabbagh, said the issue of nuclear security has emerged during the last decade as a serious issue which demands the attention of the international community. 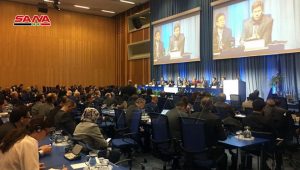 During the International Conference on Nuclear Security, which began its work in Vienna on Monday, Sabbagh affirmed that the danger of the usage or trafficking in nuclear materials or any other radioactive material in terrorist or criminal acts still represents a threat for international security.

He noted that Syria has joined a lot of instruments and treaties aimed at supporting the mechanisms which help enforce nuclear security, the most recent of which was joining the Convention on the Physical Protection of Nuclear Material.

Sabbagh stressed the need for preventing nuclear materials from falling into the hands of criminals and terrorists, in addition to the importance of providing equal opportunities for all the IAEA member states to acquire the required expertise in the field of nuclear security.

Damascus , SANA- The Ministry of Culture and the Syrian cultural milieu mourned the death …