Rome, SANA- Syrian harpist Rahaf Shaikhani, started the first steps for launching a musical project for preparing the Syrian children to become professional instrumentalists and harp players in the future.

In preparation for launching her project, soloist Shaikhani performed a musical concert at the Sarsina Museum, which was attended by the project supervisor, Petro Morpidelli, who will provide the project with a new Harp instrument, in addition to other Italian Harp players. 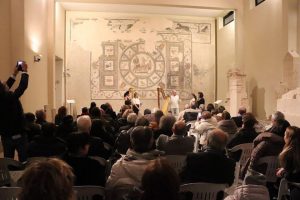 “I began preparations for the project in early May 2019 when Morpidelli decided to support the project for teaching the Syrian children to be able play this instrument based on his belief in the need to support the musical culture in Syria,” Shaikhani told SANA in a statement.

She described her experience in Italy as “positive” as she exerted all efforts to convey a true image of the Syrian people to the Italians who have been misled by the western media.

The origin of the harp instrument is Syria.

project Rome Shikhani Syrian Harpist 2020-02-08
hala
Share
Previous WHO dismisses an Israeli occupation draft to cancel an item about health situation in Golan
Next Temperature to drop, frost expected in most areas