China’s Ambassador in Damascus: Preventing spread of Coronavirus is priority… guaranteeing safety of Syrians in China

Damascus, SANA- Ambassador of China in Damascus Feng Biao affirmed that his country spares no efforts to prevent spread of Coronavirus and reduce death rate. 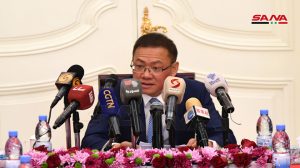 The Chinese Ambassador’s remarks came during a press conference held at the Chinese Embassy in Damascus on Wednesday about China’s measures to fight the spread of Coronavirus.

He said that his country cooperates with the Syrian Embassy in Beijing to ensure the safety of the Syrians in China.

Biao said that 27 Syrians have been evacuated from Wuhan city via Iranian Airlines as the necessary tests had been carried out for them before their return to Syria, affirming that precautionary measures are taken for embassy staff coming from Beijing to Damascus.

He indicated his country’s government continued coordination with the Syrian Embassy in Beijing to ensure the safety of the Syrian community in China.

Coronavirus is treatable and preventable, according to the World Health Organization(WHO), which recommended not to take excessive measures, expressing thanks to Syria for its explicit support to China in critical situation.

On Tuesday, the Chinese authorities announced that the number of new coronavirus deaths in the country had risen to 490, and 24,324 cases were reported in 31 areas, while 892 patients were recovered.