The meeting also dealt with the prospects for future cooperation between the two countries and ways to enhance it in all fields, especially with regard to energy, infrastructure and the establishment of new investment and industrial projects in a manner that realizes the common interests of the two friendly peoples and countries.

President Al-Assad and Borisov expressed their relief over the development of economic and trade cooperation between the two countries, which is advancing steadily to reach the level of strategic relations linking Syria and Russia at the military and political levels.

The meeting reviewed the preparations for the Syrian-Russian joint committee meetings which will be held later this year.

Borisov, in a press statement prior to his departure at Damascus International Airport, said “We have discussed with President al-Assad a number of important issues, particularly, the big projects that come in the service of rebuilding the Syrian economy, infrastructure projects of airports, border crossings and roads.”

He added that talks with President al-Assad also dealt with the issues of investing Tartous port by a Russian company.

“We have a plan to broaden the port with a total amount of half billion USD and we hope the efforts that aim to achieve this goal would be successful,” Borisov said, adding that discussions also tackled modernizing the fertilizer factory in Homs being invested by a Russian company. 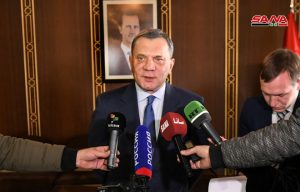 He underlined that the visit to Syria comes at a time when the country witnesses tangible procedures to reconstruct the economy, referring to the obstacles that hinder this target due to the unilateral coercive measures imposed on Syria.

As for the oil in Syria, Borisov said “We are witnessing a remarkable improvement in the situation in Syrian al-Jazeera region… and we have a firm stance which stresses that the natural resources on Syrian territories should be a property for the Syrian people and the legitimate government.

Borisov described bilateral relations between Syria and Russia as historical, adding the Russian government has taken a decision to offer 100 thousand tons of wheat as an assistance to Syrian people.

Dr. Shaaban: Syria stands by the steadfast Palestinians in the face of Israeli enemy

Damascus, SANA- Special Adviser at the Presidency of the Republic, Dr. Bouthaina Shaaban, has reiterated …