Damascus, SANA – Under the  auspices of  President Bashar al-Assad, the activities of the 3rd International Trade Union Forum kicked off at Sahara Tourist Complex in Damascus Countryside on Sunday. 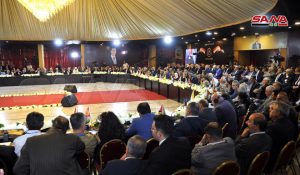 At the opening of the forum, representative of President al-Assad, Prime Minister Imad Khamis, said that Syria is facing a war in which thousands of mercenaries and terrorists from the East and the West were recruited, and that this war was funded with billions of dollars and supplied with weapons to kill the Syrians and displace them.

He emphasized that terrorism poses a threat to all countries, including those which support, finance, and employ it to achieve political goals.

The Prime Minister pointed out that the specific resistance of the Syrian people has laid the foundation for a qualitative and strategic victory that serves the whole world. 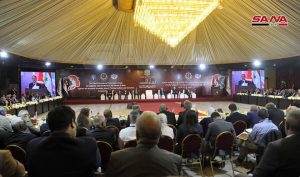 In turn, Chairman of the General Federation of Trade Unions Jamal al-Qaderi said that in addition to the terrorist war imposed on it, Syria has been facing an economic war that constitutes terror in and of itself.

Al-Qaderi said that Syrian workers have played their part in confronting the war on Syria by remaining committed to their work so that production in Syria could be maintained, adding that the Syrian people’s steadfastness will go down in history. 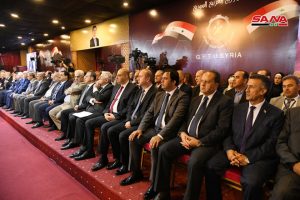 For his part, General Secretary of the World Federation of Trade Unions (WFTU) George Mavrikos said that the WFTU supports the Syrian people in confronting terrorism and foreign interference, voicing pride in supporting Syrian workers since the very beginning of the terrorist war on the country.

In a similar statement, General Secretary of the International Confederation of Arab Trade Unions (ICATU) Ghassan Ghosn said the embargo and sanctions on Syria are motivated by the United States’ realization that its plans of using terrorism in Syria have failed, so it decided to continue the war on Syria as an economic war.

Ghosn called for devising a plan for supporting the steadfastness of the Syrian people, in addition to calling for launching a media campaign and practical actions and addressing the world public opinion to reveal the truth about the US policy of besieging independent and free countries. 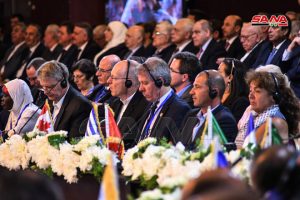 In turn, Secretary General of the Organization of African Trade Union Unity (OATUU) Arezki Mezhoud said that the Syrians have set an example in resistance and steadfastness and achieving victory in the face of hardships, expressing confidence that Syria will recover its economic vitality and its  standing among nations.

Later, in a speech during the second session of the Forum, Deputy Foreign and Expatriates Minister Fayssal Mikdad stressed the need for solidarity among peoples and workers and rallying to confront the economic sanctions imposed by the US administration. 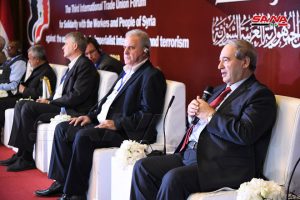 Mikdad said the real goal of the war on Syria is to stop it from being a force that opposes US and Israeli plots in the region, and a force that supports the Palestinian people and works to liberate the occupied Syrian Golan.

He noted that certain states which supported terrorism are wrong to believe that they are safe from the US and Israeli plots, because the United States doesn’t respect anyone, not even its closest allies that pay it billions.

Later, a  number of delegates participating in the Forum affirmed their full solidarity with Syria and its people in the face of the aggressive terrorist war, hailing the steadfastness of the Syrian people and workers who will rebuild their homeland.

Participants in the second and third dialogue sessions of the forum focused on the importance of exposing the practices of international imperialism and its interventions in the internal affairs of countries and supporting terrorism, affirming their rejection of the economic siege imposed on Syria.

They stressed that the meeting in Syria is an evidence on its victory over terrorism, calling for continued support of the Syrian people in their fight against terrorism and solidarity with them and with the free peoples that confront global imperialism.

Participants also stressed that Syria will emerge stronger from the crisis and defeat imperialism, which aims to invade countries to plunder their wealth.

The International Trade Union Forum is held in solidarity with workers and people of Syria against terrorism, economic blockade and imperial intervention policies.

About 100 Arab and foreign trade unions and syndicates and dozens of intellectuals, journalists, political and social activists from Arab and foreign countries are participating in the forum. 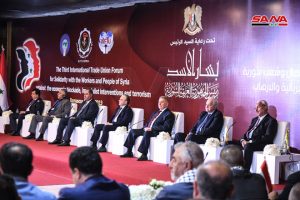 The two-day event  will discuss a number of issues related to the illegality of sanctions against the Syrian people, the negative impact of the policies of siege and sanctions, and the role of the syndical and civil organizations and media in exposing the Takfiri thought and the intellectual and political hypocrisy of the countries which claim to be fighting terrorism in the media when in fact they are supporting it on the ground.