Two people martyred, three others injured in a rocket shell in Damascus Countryside

SANA reporter said that a rocket shell fell down on a car in Sasa area in the southwestern part of Damascus Countryside, claiming the lives of man and a girl, in addition to injuring three women.

He added that the wounded women sustain serious injuries. 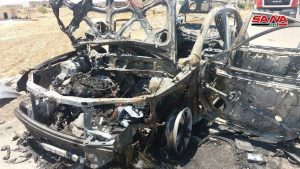 Damascus Countryside rocket shell Sasa area serious injuries 2019-07-21
admin
Share
Previous Al-Moallem starts an official visit to Belarus upon an invitation by its Foreign Minister
Next Transport Ministry: A terrorist attack on a train for shipping phosphate in the eastern part of Homs