Damascus, SANA – President Bashar al-Assad on Tuesday chaired a periodic meeting of the Cabinet, which focused on the need to devise a specific mechanism and strategy for enhancing communication with Syrian citizens in the coming stage. 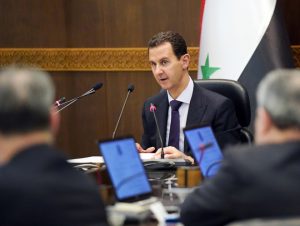 During the meeting, which was held at the Prime Ministry, President al-Assad said the most vital step on the road towards building an active communication with citizens is transparency and providing them with information, whether it is about crises and emergencies that face the government and have direct impact on people’s lives, or that can help people understand how the government and state establishments work.

President al-Assad said that weak communication, lack of success in properly marketing the performance of state establishments, and working on individual basis led to magnification of the image of the crises created by Syria’s enemies for the eighth in a row on all levels, particularly on military, political, and economic levels. 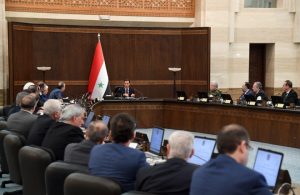 His Excellency said that this is why it’s important to devise a communication mechanism that informs citizens about the policies carried out by the state establishment in order to confront erroneous or incorrect news.

“Dialogue with the citizens, knowing how to address them, and sending the messages that meet their needs is the best way to find out about changes in the society and how it is evolving, thereby leading to evolving with it and building a good relationship between the citizens and the government that is based on credibility,” President al-Assad said.

His Excellency was briefed by the Ministers about the obstacles affecting their work and their suggestions for overcoming these obstacles and for developing the government’s performance in a matter that reflects directly on citizens.

Assad Cabinet periodic Cabinet meeting President al-Assad President Bashar al-Assad 2019-05-14
Hazem al-Sabbagh
Share
Previous President al-Assad to Catholicos Aram I: Syria was and always will be the home of all its people, regardless of religion or ethnicity
Next Army targets with intensive strikes dens of “Jabhat al-Nusra” terrorists in countryside of Idleb, Hama