Homs, SANA- With its charming historical icons, Church of Saint John the Baptist in Qattina town, Homs southwestern countryside, attracts its visitors through its ancient stones, dating back to hundreds of years, which are arranged in a unique architectural design that endows it with high prestigious status.

The Church, dating back to the 15th century AD, is one of the most important tourist destinations in Qattina town as the current church had been built over an ancient church which was a monastery inhabited by some monks. 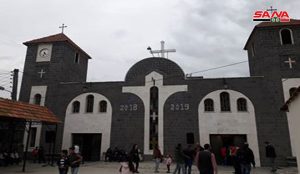 Khouri Mtanius Wahbi told SANA that what have been left of the ancient church are some sacred icons which have been transported and put in the new church, in addition to some of the ecclesiastical utensils and some ancient books.

The old church was a small church which one can enter through descending a staircase as it was built under the earth level, yet nowadays the old church no more exist as a new big church was built over it with the same name. 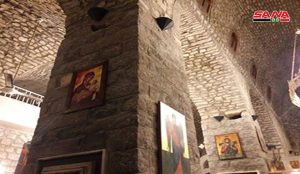 Mtanius said that some sources mention that the ancient church was destroyed and some of them say that the new church was built over it and it remained almost intact.

The present church consists of three yards built of the black basalt stone in 1909 AD and in 1926 the church was plastered with lime.

In the year 1996, the lime was removed from the walls of the church and restoration works started according to the ecclesiastical rules.

Mikdad: Turkish occupation is the biggest danger in northern Syria

Damascus, SANA-Foreign and Expatriates Minister, Fayssal Mikdad, said that the Turkish occupation is the biggest …