Quneitra, SANA – Under the patronage of President Bashar al-Assad, a central celebration was held on Wednesday in al-Baath City in Quneitra province on occasion of the 73rd anniversary of Evacuation Day, Syria’s Independence Day. 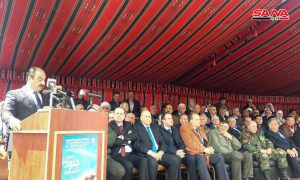 In addition to marking the anniversary of the evacuation of French colonialism from the country, the event also affirms the Syrian Arab identity of the Golan.

Delivering a speech, Assistant Secretary General of al-Baath Arab Socialist Party Hilal al-Hilal said that the terrorist organizations and their supporters have failed to weaken the Syrian state and resorted instead to economic warfare, stressing that the Syrian people who have been able to hold up in the face of difficult circumstances for eight years and bear up all the difficulties of living and crimes practiced by terrorists will triumph on this economic blockade.