Damascus, SANA – The Foreign and Expatriates Ministry on Sunday held a farewell ceremony for former Ambassador of Venezuela in Damascus Imad Saab on occasion of the end of his mission. 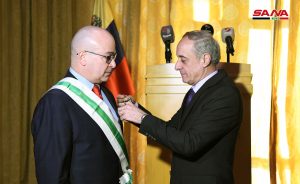 During the event, which was held at the Four Seasons Hotel in Damascus, Ambassador was awarded the Syrian Order of Merit of Excellent Degree in appreciation for his person and for his friendly country.

Saab thanked President Bashar al-Assad for awarding him the Order of Merit and for the support and care he received from various Syrian establishments to facilitate his mission.

The former Ambassador voiced happiness over the victories achieved by Syria against terrorism, noting that Syria’s success helps Venezuela prepare for the scenarios being concocted against it. 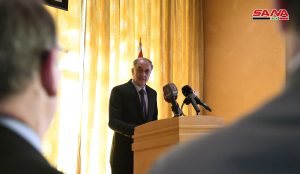 For his part, Assistant Foreign and Expatriates Minister Ayman Sousan said that Syria supports Venezuela in confronting the challenges it faces and the US embargo and pressure.

Sousan said that during the years he worked as Ambassador in Syria, Saab has earned the appreciation of everyone through his activities and because he shared with the Syrians the difficult years they experienced, becoming a witness to their determination and to the achievements against terrorism.