Damascus, SANA- Christian denominations in Syria on Tuesday held masses and prayers on occasion of the New Year.

A holly mass celebrating the New Year was held at the Greek Orthodox Mariamite Cathedral in Damascus that was headed by Greek Orthodox Patriarch of Antioch and All the East John X Yazigi.

A number of bishops, persists and deacons participated in the mass. 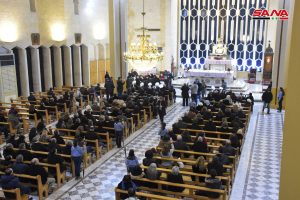 A mass was held at a cathedral  for Syriac Catholic in Aleppo for the restoration of security and stability to the city.

The mass was led by patriarch Antoine Shahda in the presence of a number of Islamic scholars.

The mass talked about the noble meanings of Christmas and the news year in addition to prayers for the peace in the country.

Syria’s grand Mufti, sheikh Ahmad Badreddin Hassoun affirmed that Syria is the land of peace, adding that it has fought terrorism on behalf of the whole world.

Patriarch Shahda, for his part, hoped the new year would be a year of the restoration of peace and security to the whole country.