During the meeting, emphasis was placed on the important role of media on the Arab arena, because the external wars waged on us are primarily intellectual and media wars, with mass media being the actual carrier of these wars’ intellectual tools.

President al-Assad said that “immunizing workers in the field of media is essential for immunizing peoples, because what the external sides have been doing for decades is manipulating concepts, therefore the main challenge that media had to face is awareness and giving all information to the public, so that it becomes capable of analyzing and connecting, which gives it a broader space to understand what is happening around it.”

His Excellency said the media must be the first to deal with shortcomings in Arab communities which are mainly linked to the identity crisis we experience in the region, which the West has managed to exploit as it used its media to infiltrate our communities and interfere in our states’ internal affairs.

For their part, members of the delegation said that the Federation’s unanimous decision to hold its General Secretariat meetings in Damascus sends a message to the world that Arab federations and syndicates stand with Syria in its war against terrorism.

They lauded the degree of awareness among the Syrian people, which allowed it to stand fast in the face of this war despite all the foreign support for terrorism.

The delegation’s members said that winning the media battle requires changing the media rhetoric and language in order to increase influence on the audience, thereby strengthening and immunizing Arab citizens against any foreign propositions that seek to fragment and divide Arab communities. 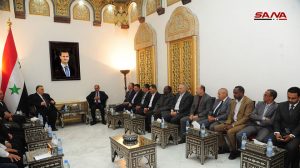 In the same context, Speaker of the People’s Assembly Hammoudah Sabbagh met the delegation, affirming that the meeting of Arab journalists in Damascus is a great embodiment of solidarity with Syria which has always been standing by the Arab brothers.

He said that one of the aggression forms to which Syria was exposed has been through media misleading and fabricating the facts.

Members of the delegation, for their part, stressed that the dealing of mass media with Syria was unjust, expressing support to the Syrian media institutions.