Lattakia, SANA-Russian traveler Irina Sidorenko wanted to start her journey around the world a year and a half ago from Syria as a gateway to the world, but the circumstances of the terrorist war on the country prevented her. For that reason, she headed to Europe and from there to Africa, through Egypt and Jordan, hoping to realize her dream of visiting Syria.

Sidorenko has traveled about 75,000 km in which she visited 55 countries. But she only came to make her dream come true with the opening of the border crossing of Nassib-Jaber with Jordan to be “the first foreign national to enter Syria through this crossing”.

After spending about a week in a number of provinces, she visited the city of Lattakia where she met with SANA’s reporter, and expressed her happiness about what she saw in Syria despite the years of war.
The traveler also spoke about the time she spent in Damascus and her tour in the Old City, wandering in its lanes and popular markets.

“Damascus…It is the city that 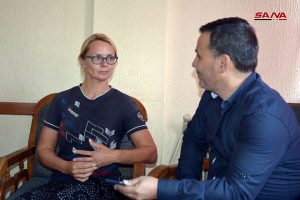 has risen from war to life and in it I saw the love of people and their hospitality despite the tough life,” Sidorenko said.

During her stay in Damascus, she sent several messages on her Facebook page about the beauty of life in contrast to what media depicts, and contrary to convictions that have become entrenched in many people around the world.
“My friends said they want to visit Syria after I told them about the life and the beauty of Damascus, Lattakia and other cities,” she said.

The traveler wants to visit archeological sites in Syria after Lattakia which she visited some of its landmarks on her first day. She also plans to visit Palmyra and the city of Aleppo before leaving Syria, hoping to visit all Syrian cities later after defeating terrorism.

“My visit will remain a happy memory… It filled my heart with love for this ancient country and civilized people,” she said.

She also stressed that she will be a Syrian messenger to the world and will encourage people to visit this beautiful country.