Daraa, SANA- Terrorist organizations supported by countries hostile to the Syrians have targeted the historical archaeological sites in Syria since the beginning of the crisis in it. 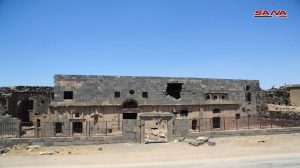 Zein El-Abidine Palace in Enkhel, which dates back to the end of the second century AD and the beginning of the third century, is another witness added to hundreds of cities and archaeological sites which show the volume of terrorism caused to the human heritage in the land of the civilizations.

The palace is a masterpiece built from the basalt of Horan and is considered to be the most beautiful palace in the Roman world. 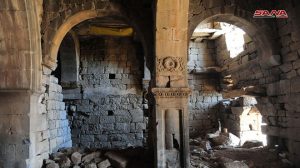 Head of Enkhel City Council, Yassin al-Zamel said that the terrorist organizations positioned in Enkhel city attacked the palace, vandalized its archaeological structure and stole many of its contents.

Head of Daraa Antiquities Department said that the department will rehabilitate and restore the palace to enable tourists to visit it again.