Aleppo, SANA – Representatives of Syrian clans organized on Saturday a public gathering in Deir Hafer area in the eastern countryside of Aleppo province, in order to express rejection of foreign interference in Syrian affairs. 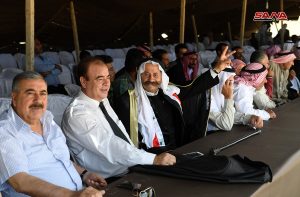 Representatives of 70 clans and tribes expressed during the event their rejection of any foreign military presence without the approval of the Syrian state, and that such a presence is illegal and will be dealt with using all available means.

The participants expressed commitment to the state’s constitutional and legitimate establishments, to Syria’s territorial integrity, and to the Syrian flag, asserting that the Syrians alone have the right to draft and approve the Syrian constitution.

They also denounced the actions of some Turkish groups that prevented a delegation from Hasaka province from attending this event.