A military source said the army’s air defenses shot down tens of Israeli missiles, preventing most of them from reaching their targets, while some managed to hit a number of air defense battalions, radars, and an ammo depot. 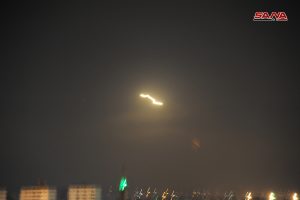 SANA’s correspondent said that information indicates that the Israeli aggressions targeted air defense battalions and radars in Syria with missiles fired by enemy warplanes from within the occupied territories.

The command of the Lebanese Army said that 4 Israeli warplanes violated Lebanese airspace at the same time as the aggression took place.

Meanwhile, SANA’s correspondent in Quneitra said the Syrian air defenses shot down Israeli missiles over al-Baath city, adding that prior to that the Israeli enemy fired shells at the city but they didn’t cause any injuries.

The Israeli media reported that occupation authorities instructed settlers in the occupied Syrian Golan to head to shelters.

This aggression took place less than 24 hours after the Syrian air defenses shot down two Israeli missiles over al-Kisweh area in Damascus Countryside.

air defenses Israeli aggression Israeli attack missiles 2018-05-10
m.eyon
Share
Previous General Ayoub visits Hmeimem base on occasion of Russia victory in WWII
Next President al-Assad to Greek Kathimerini newspaper: Syria is fighting terrorists, who are the army of the Turkish, US, and Saudi regimes-video