Abu Dhabi, SANA – Syria’s national football team was placed in Group B in the groups stags of the 2019 AFC Asian Cup, alongside Australia, Palestine, and Jordan. 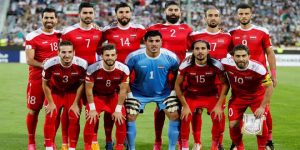 The draw took place on Friday in Dubai.

The draw divided participating teams into 4 pots based on their rankings of April 2018, with Syria being placed in pot 2 with its ranking of 76 along with China, Uzbekistan, Iraq, Qatar, and Thailand.