Damascus, SANA- The United Nations Resident Coordinator in Syria Ali al-Zaatari stressed said there is a “very close cooperation” with the Syrian government, the Syrian Arab Red Crescent (SARC), the International Committee of the Red Cross (ICRC), international organizations and NGOs to respond to the humanitarian situation in Eastern Ghouta and Afrin.

During a joint press conference with the SARC’s President Khaled Hboubati which was held at the Four Seasons Hotel on Wednesday, al-Zaatari said that 200,000 units have been provided, including living needs such as blankets, mattresses and others for civilians leaving al-Ghouta, in addition to about 30,000 personal hygiene units and food for about 100,000 people.
They also included special nutrition for children, with 50 medical teams deployed to respond to health needs.

The UN, the SARC and all partners have done a “great job” to provide aid to those in need, he said, adding that despite all the funding allotted to face 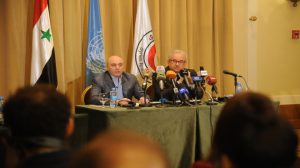 the severe crises in the Eastern Ghouta and Afrin, it falls short of the needed amount, adding that USD 150 million are needed to meet all the needs, only 6 percent of which has been secured.

Commenting on the situation in Afrin, the Coordinator said 180,000 were displaced from Afrin to Tal Rifaat and nearby villages, namely Nubul and al-Zahraa, adding that “we are afraid that the military action will be extended to Tal Rifaat, which will lead to another mass displacement of civilians who are already living in difficult conditions.”
Al-Zaatari indicated that the villages near Afrin cannot cope with the large number of displaced persons since there are many medical cases, with some of them moving to Aleppo.

He added that the UN team has received the necessary approval to send a mission next week to the city of Raqqa to assess the needs and possibilities of assistance.

Speaking about the status of Eastern Ghouta, Hboubati said that “we were receiving from 10 to 15 thousand civilians from Eastern Ghouta daily and we were not prepared for this large number, especially that no civilian had exited from the area during the first ten days after the safe corridor was opened, adding that “we are trying, in cooperation with partners, to cover everyone’s needs. There are 12 will-equipped makeshift centers ready for receiving the evacuees.

“The SARC volunteers withdrew from Afrin although we were making efforts to help civilians and were in the process of bringing in an aid convoy, but we could not obtain the necessary permits to ensure our safety,” he said. 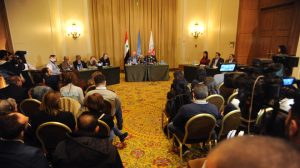 “The entry of the Turkish Red Crescent, backed by the military force, made us unable to cover the needs of the Afrin area,” said Hboubati.

On the health response, Habobati said that medical points were set up in all the makeshift centers and 12 mobile clinics were established to respond to al-Ghouta residents and 6 clinics for the citizens of Afrin.

In response to questions from journalists, al-Zaatari said that entering any hotspot requires identifying the parties in control. “In the case of Afrin, the Turkish government is responsible for ensuring the safe entry and exit of humanitarian staff,” noting that there are complexities in the access to areas such as Kefraya, al-Fouaa and Yarmouk Camp.

Speaking about Deir Ezzor, Hboubati said that during the siege of the city, 503 airdrops were provided to secure the food. “After liberating the city, 6 convoys of aid were run in cooperation with the World Food Program (WFP). Today, the Syrian state is present and is offering everything to the people of the city,” he stated.