Hama, SANA- Hama Customs seized two trucks loaded with more than 2,000 cooking gas cylinders which were planned to be smuggled to terrorist organizations in Idleb.

Head of the Customs Department in Hama Col. Louay Makhlouf told SANA that 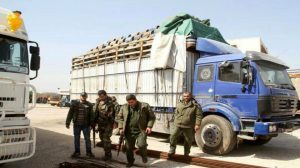 after close observation and according the available information, a patrol of the Department pursued two trucks and seized them near the industrial area in Hama.

Makhlouf said that according to the primary confessions of the arrested drivers, they were heading to areas were terror organizations are positioned, adding that their fines are estimated at about SPY 146 million, and after finishing the preliminary investigations with the drivers they were referred to the judiciary for completing investigations and pressing charges against them.