Damascus Countryside, SANA – Hundreds of civilians exited from Eastern Ghouta in Damascus Countryside province through the humanitarian corridor leading to al-Wafideen Camp set up by the Syrian Arab Army for securing and transporting them to the housing centers. 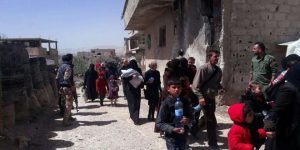 SANA that 1092 civilians who had been besieged by the terrorist organizations in Eastern Ghouta exited on Sunday through al-Wafideen corridor.

SANA’s reporter said that most of the civilians exiting from the corridor are women, children, and elderly people, in addition to some patients, adding that they were received by army personnel in cooperation with medical teams from Damascus Countryside Health Governorate.

The reporter added that 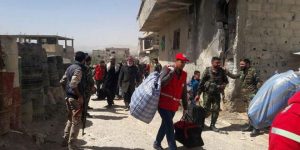 Damascus Countryside Governorate has provided ambulances and buses for transporting the civilians who are evacuated from Ghouta.

Since al-Wafideen safe corridor was opened on February 27th, the terrorist organizations attempted to prevent the civilians from leaving through it so that they can keep using them as human shields.

army civilians eastern exit Ghouta secures 2018-03-25
ruaa-jazaeri
Share
Previous Buses start to enter into the outskirts of Erbin town in eastern Ghouta to transport second batch of militants and their families from Erbin, Zamalka, Jobar, and Ein Tarma to Idleb
Next Military source: More than 500 civilians held by terrorist organizations in eastern Ghouta exited via al-Wafideen corridor so far