Aleppo, SANA – Thousands of people organized a mass rally at Saadalla al-Jaberi Square in Aleppo city to denounce the Turkish aggression on Syrian territories which displaced thousands of families. 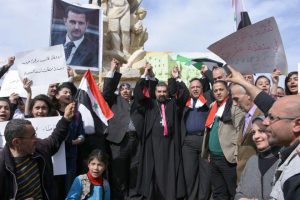 The participants denounced the Turkish aggression and the international silence over the suffering of the people from Afrin and its villages who were displaced due to that aggression which has been going on for over two months.

The participants affirmed that Syria will remain unified and all aggressors will be defeated, calling on the Turkish forces to leave Syrian territory immediately, asserting that Recep Tayyip Erdogan and the terrorist groups affiliated with him are carrying out crimes against humanity, yet there has been no active international reaction to them.