Damascus, SANA – “It’s an opportunity in all sense of the word” is how Mrs. Bassima al-Fandi expressed her happiness to be part of the “training culminating in employment” program launched by the Social Affairs and Labor Ministry in cooperation with the industrialists of Damascus and its countryside. 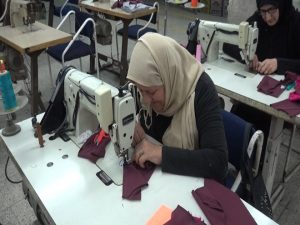 Talking to SANA from behind the sewing machine she works on at Majed and Mohammad al-Zayed Company for clothing in al-Barda area in Damascus Countryside, al-Fandi said “this is exactly what I’ve been looking for ever since I’ve become the sole breadwinner for my family and my children who are studying in the university.”

The project began in mid-2017, starting in al-Barda area in Damascus Countryside by coordinating with Khayyat and al-Zayed clothing companies to train beneficiaries selected in coordination with charities to pick those who need work the most.

Ghina al-Awad is another successful example; she graduated from a home economy institute last year, and now she works at the same company. “I wasn’t worried about working at the private sector, and we shouldn’t make distinctions between the public and private sector,” she said. 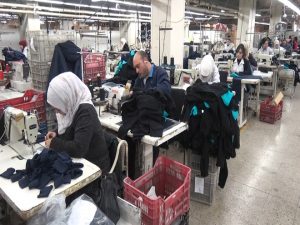 The same goes for Rahaf Ibrahim, a French language student at the Faculty of Literature in Damascus, who received training via the program and learned sewing quickly.

SANA met the owner of al-Zayed company, Mohammad Majed al-Zayed, who said “we don’t just train beneficiaries; we also work to rebuild these individuals’ self-confidence and their confidence in being able to be productive persons.”

So far, 75 workers came to train in the company, 15 of them having already begun work on production lines.

Al-Zayed said that the company seeks to reach a quota of 150 workers by the end of 2017, and the priority in picking beneficiaries goes to relatives of martyrs and injured people and people with disabilities.

Beneficiaries receive a wage of SYP 30,000 for beginners, and are provided with transportation, and when the worker reaches the production stage, their pay ranges between SYP 50,000 and 70,000.

Faten Khabbaz, a mother of five and the only breadwinner for her family due to her husband’s absence, said that after finishing the training she began work in the production department, and the work there suits here as it starts at 7 am and ends at 3 pm.

Marah Mahmoud is a mother of a two-year-old girl, and his husband is currently carrying out mandatory military service in the Syrian Arab Army. She found out about the work opportunity via the Social Affairs and Labor Ministry and began training and work, taking her child with her since the factory has a nursery. 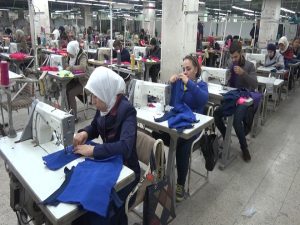 Director of the Job Market Observatory at the Social Affairs and Labor Ministry Mahmoud al-Kawwa told SANA’s correspondent that this program is one of the activities that seek to support industrialists by providing them with skilled labor, ensuring that work continues at their facilities on one side, and on the other side training the people who need work the most and later sign work contract with them.

According to the Ministry, the second stage of the program will cover areas in the provinces of Hama, Homs, and Daraa, in addition to assessing the needs of the job market and the industrial facilities in the Sheikh Najjar industrial zone in Aleppo in cooperation with the Aleppo Chamber of Industry.