Hasaka, SANA – The delegation from the Regional Leadership and the Cabinet continued on Monday its visit to Hasaka province, visiting a number of sites including a commercial market project, bread production plant, and two schools. 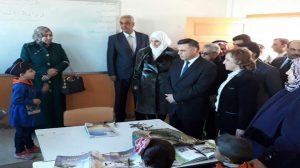 The delegation members reviewed the progress made in the construction of the market, which contains 113 stores.

Education Minister Hazwan al-Waz said that instructions were given to provide essential supplies and equipment for schools immediately, such as prefabricated classrooms, as well as providing electricity generators.

Meanwhile, Hasaka Governor Jayez al-Moussa said that the locals are going about their daily lives as the province in general is safe and stable, asserting that the government is working constantly to provide support and ensure that work and education are proceeding well and that all citizens’ needs are met.