Lattakia, SANA- A festival for martial arts was held at al-Assad Sports City in Lattakia on Friday with the participation of Russian athletes.

The festival was attended by large audience who enjoyed live performances of martial arts. 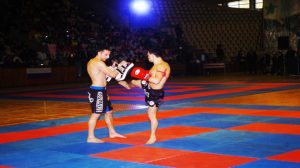 The event was held in cooperation with the General Sports Federation, Russian Federation of Martial Arts and the Syrian Community in Russia.