Damascus, SANA, Prime Minister Wael al-Halqi said the honest stances of Jordanian people who understood the nature of global war against the Syrian people confirm that the Arab people is one and they are adhered to their land.

Al-Halqi, meeting a delegation of Jordanian Medical Support Committee to Syria, affirmed that the Arab people are aware of some Arab reactionary regimes’ connection to foreign agendas that meet the greedy nature of US-backed Zionist projects in the region, spread of chaos and violence.

“Syria is defending the whole Arab nation and will come out of the crisis victorious due to the unity of people, Army and leadership,” al-Halqi said. 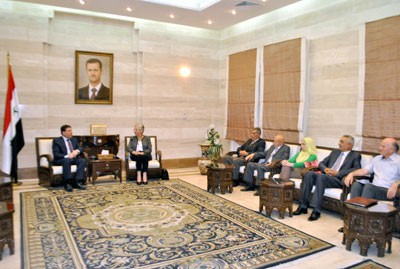 He appreciated the role played by the support Committee and their aid of medical equipment and machines to the Syrian people.

Members of the committee, for their part, affirmed that the Syrian people are paying the price of their standing against the US-backed Zionist schemes in the region.