Capitals, SANA, Syrian students and community members in France gathered in Joffer Square in Paris to express their joy over President Bashar al-Assad’s victory in another 7-year term in office.

The participants said that Syria has achieved a democratic victory represented by the winning of President al-Assad in the elections, pointing out that election is another victory added to Syria’s achievements.

They also expressed readiness to repel all conspiracies to which the country is exposed which aim at undermining Syria’s steadfastness, hailing the role of the Syrian Army in confronting terrorism.

The participants stressed that Large turnout on ballot boxes around the world reflected the Syrian citizen support to their leadership, rejecting any foreign intervention in Syria’s internal affairs. 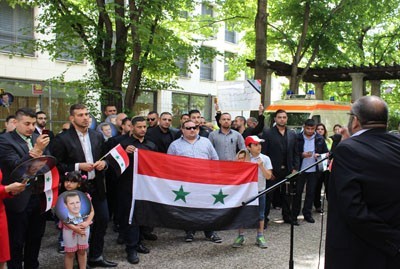 In the same context, Syrian students and community members in Romania held another festival in support of re-electing President al-Assad, the country and the Army in its war against the foreign-backed terrorism.

They congratulated the Syrian citizens in choosing the President who is able to preserve Syria’s dignity and sovereignty.

The participants started celebration with Syria’s National Anthem and stood a minute of silence to honor the Martyrs’ souls, raising posters of President Bashar al-Assad. 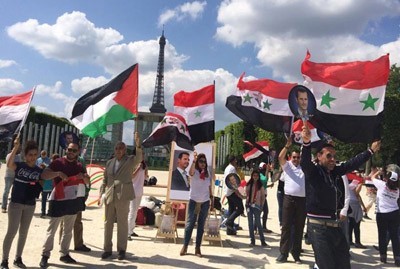 In Poland, Syrian students and community members held a celebration on the same occasion, with the participants expressing their joy.

They also stressed that elections expressed the will of the Syrian citizens in preserving the country’s dignity apart of any foreign intervention, expressing full support to their country under leadership of President Bashar al-Assad.

The participants waved the national flags and raised pictures of President al-Assad.

Other activities were held in Germany, Malaysia and Sudan In support of President al-Assad’s victory in elections.