Damascus, SANA, Minister of State for Reconciliation Affairs Ali Haidar affirmed Sunday the Syrian State is committed to get al-Yarmouk camp out of its crisis and end the suffering of the Palestinian and Syrian residents there.

Haidar told reporters following a meeting with Head of the Political Bureau of the Palestinian Liberation Organization PLO in Syria, Ambassador Anwar Abdul-Hadi, the Syrian leadership wanted the Palestinians to have a solution to the crisis by their own.

“The solution which has been realized in some areas of the camp didn’t succeed until now for reasons related to the armed groups present inside the camp… today, we have reached a stage where there are no more opportunities after all what has been offered to the gunmen to prevent the camp from a genuine humanitarian catastrophe,” the Minister said.

Ambassador Abdul-Hadi, for his part, affirmed contacts are underway among the Palestinian Liberation Organization, Palestine and the Syrian Government to end the crisis in the camps, particularly al-Yarmouk Camp which was invaded by the gunmen who forced families to flee the place and increase their basic suffering as people displaced from their Homeland due to the Zionist occupation. 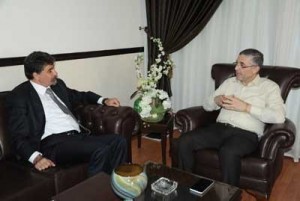 He pointed out to the authorization given by the Syrian leadership to the Palestinians to solve the crisis in the camp with the gunmen, and the cooperation between PLO and the Syrian Government to deliver food and medicine to the families there.

“During the meeting, we have agreed to take new steps towards a solution to the camp’s crisis through giving a last chance to the gunmen to have a peaceful, political solution, most importantly, freeing the camp from weapon and gunmen and settle their cases to return to their normal life,” Ambassador Abdul-Hadi said.

A fisherman dead, material damage to tourism facilities in sea storm on Lattakia

Lattakia, SANA- General Directorate of Ports announced Saturday that a fisherman died as his boat …