Damascus, SANA- The Damascene Oud is considered as among the most famous-high quality music instruments amid persons interested in Arab music, especially as Syria has been the cradle of it since ancient times, where stone inscriptions were found in the north of Syria dating back to 5,000 years representing women who play it.

In light of the importance of the Oud in the Syrian immaterial heritage and the need to restore it to the top of the cultural scene, the Heritage Directorate of the Ministry of Culture has set up an exhibition of musical lutes within the celebration of the Syrian Culture Days at al-Assad National Library in Damascus. 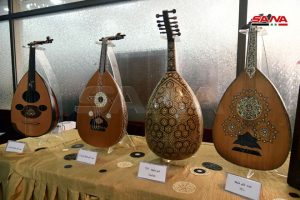 The exhibition included Oud instruments designed by Syrian craftsmen from the most prominent Damascus oud makers, dating back to the first half of the last century, including (brothers Rafael and Abdu Nahat), whose instruments date back to 1904.

Issa Awad, a researcher in old Damascene Oud, pointed out in a statement to SANA that the models included in the exhibition are personal possessions dating back to ancient periods of time, as the manufacture of this instrument in Damascus is considered an ancient heritage craft, but it was developed in terms of quantity and quality at the hands of al-Nahat family. 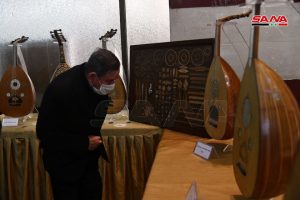 Awad added that despite the presence of competitors in the Oud industry in the region, the Damascene design remains the most beautiful and the best, and the sound of its strings is comparable to its global counterparts.