Homs, SANA- The mosaic is an original Syrian art that is characterized by the large number of ancient paintings discovered in Syria until today , in addition to this the country has the largest mosaic painting in the world. 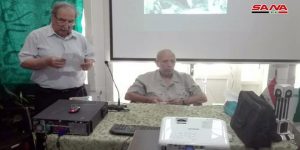 Researcher, Dr. Khalil Al-Miqdad said during a lecture held at the Syrian Historical Association in Homs that the number of mosaic paintings unearthed in Syria reached about 250 ones that were found in the archaeological sites in many places of the country, like the countryside, the coast, inland, cities and Al- Badyah.

He pointed out to the importance of the mosaic paintings that were distinguished in Syria and became a model to be followed in all countries of the world.

The Researcher added that many schools specializing in this field and art have occurred, like Busra , shahba, Palmyra and Antakya as each school has become different from the other .

Al-Miqdad indicated that the process of making mosaic went through many historical stages, the most important one, the pre- Hellenistic stage the Hellenistic era, the Roman period, pointing out that each stage was accompanied by concepts and beliefs from Islamic and Christian religions were overshadowed by plants and engineering drawings unlike the previous ones.

2020-06-26
m.eyon
Share
Previous On anniversary of liberating Quneitra, Syrians are more determined to restore occupied Syrian Golan completely
Next A child seriously injured in explosion of boiler for oil refining in Raqqa countryside Moscow, SANA- The Russian Ministry of Foreign Affairs has affirmed that the aim of the …