Homs, SANA- Despite siege and Western coercive measures against Syria, work and production are ongoing in Hassiya industrial city aimed at supporting the national economy and meeting the local markets’ needs of various industrial items. 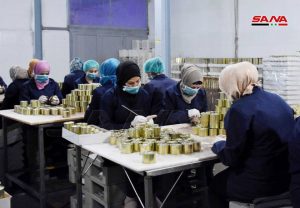 Since the beginning of the current year, the number of investors in Hassiya industrial city has increased by 20 investors, raising the total number to investors to 936 ones.

Director of the industrial city, Bassam Mansour, pointed out to the continuous growth of revenues, in which they reached 2.4 billion in 2018, rising to 2.8 billion in 2019, and reaching one billion during the first five months of 2020.