Palmyra, SANA – A fire erupted at the Palmyra Orchid oasis south of the city, extending from near Palmyra Cham Hotel to the vicinity of the southern catacombs. 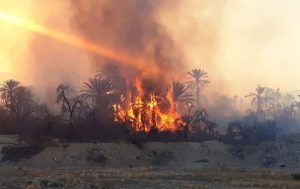 Assistant Director of the Palmyra Agriculture Department Ahmad Yousef told SANA’s reporter that the Department, civil defense, and the authorities in Palmyra are working to extinguish the fire, the causes of which have not been determined yet.

Yousef said the fire spread across an area of around 150 hectares of the historical site, which has an overall area of 400 hectares, adding that firetrucks from Hayyan area arrived to help put out the flames.

He said that efforts to control the flames are hindered by the landmines left behind by terrorists, the thickness of trees, and the walls and narrow roads between the orchards.