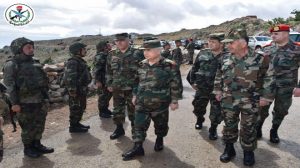 Accompanied by senior officers of the General Command of the Army and Armed Forces, Ayoub met army personnel in these positions and relayed to them the best wishes of President Bashar al-Assad on occasion of Eid al-Fitr.

The Defense Minister was briefed by field commanders on the measures taken by army units and positions to remain ready to deal with any threats. 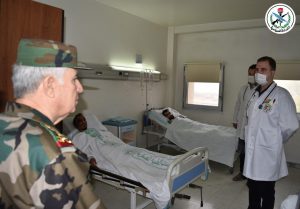 In addition, Ayoub visited injured army personnel at Tishreen Military Hospital, offering them his best wishes on occasion of the holiday.

He also visited one of the military medical centers that has been equipped for dealing with any repercussions related to the Coronavirus pandemic.

Also on this occasion, military commanders visited martyrs’ graveyards and placed wreaths on behalf of President Bashar al-Assad at memorials there.