Aleppo, SANA – Syrian Arab Army units uncovered hideouts and workshops that had been used by terrorists for manufacturing weapons and missiles in Kafr Naha, Uwayjil, and Anjara in Aleppo western countryside.

A field officer said in a statement to SANA’s reporter in Aleppo that as part of the its efforts to secure areas which have been liberated from the terrorism, army units uncovered hideouts for terrorists that had occupied house after displacing their residents in Kafr Naha, Uwayjil, and Anjara in Aleppo western countryside. 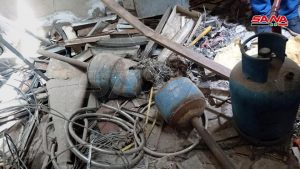 The officer also said that the army uncovered two workshops for the manufacture of ammunition, shells of various types, and rockets in a factory for making heaters in the town of Kafr Naha, in addition to large-sized rockets, improvised “Jahanam” cannons, and large amounts of explosives which are used in making these rockets, in addition to shells weighing 40 kg and small mortar shells in a textiles workshop in the town of Uwayjil.

Another terrorist hideout dug into a mountain was found in Anjara area, the officer said, and inside it there were shells of various types, grenades, and quantities of chemicals and toxic substances that were placed in plastic brambles and were prepared for use by the “White Helmets” terrorist group, in addition to a number of terrorists’ ID cards and documents containing orders for carrying out execution sentences signed by terrorist Abdullah al-Muhaysini.