Hama, SANA- Competent authorities doubled their efforts to rehabilitate the educational sector in the eastern and southern countryside of Idleb after have been liberated by the Syrian Arab Army from terrorism which has left huge damage to the infrastructure, particularly the school buildings. 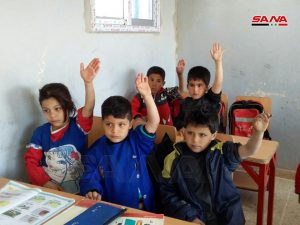 The Ministry of Education dedicated SYP 3 billion for the maintenance operation of the schools in the liberated countryside of Idleb province.

In statements to SANA, Director of Idleb Educational Department Abdel-Hamid Ma’amar said that the schools which were included in the maintenance operations are distributed in the areas of Sinjar, Abu al-Duhour, Khan Sheikhoun, Maarat al-Nu’man and Saraqeb.

Ma’amar underlined that the educational process in Idleb liberated countryside is proceeding at a good pace despite off some difficulties like the lack of buses to transport the educational cadres.

For her part, Head of School Buildings Department ٌRanim Haj Lattouf said that after restoring safety and stability to those areas in the eastern countryside of the province, maintenance operations, in cooperation with the United Nations Children’s Fund (UNICEF), for scores of schools at Sinjar, Abu al-Duhour and Khan Sheikhoun areas have started. 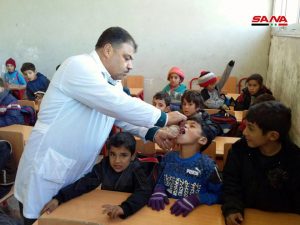 In turn, Head of the Planning and International Cooperation at Hama Educational Department Yahia Jaweish indicated that members of the cadres have been trained, in cooperation with the Educational Ministry and the UNICEF, on prevention measures of explosives left by terrorists to raise the students’ awareness on their danger.

Jaweish said that a school vaccination campaign was launched in the schools in the liberated areas in cooperation with the Health and educational departments, as the campaign targets all school students.