Aleppo, SANA – The President Square in Aleppo city witnessed on Sunday a public gathering in celebration of the victories achieved by the Syrian Arab Army in Aleppo countryside and the defeat of terrorists in the surrounding of the city. 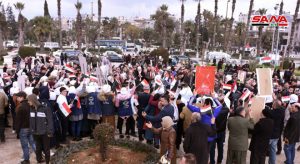 The gathering, which saw the participation of the union of charities and associations for people with special needs, included artistic performances presented by the participating children.

In the same context, al-Yarmouk Club and the Scouts Regiments 7 and 8 which belong to the Aleppo Armenian Orthodox Parish organized a march led by the marching band.

The march began at the Parish in Villat neighborhood, passing through the streets of al-Aziziya neighborhood, until it reached al-Yarmouk Club.