With participation of Syria, WSDC 2021 kicks off

Damascus, SANA – The Administration of the Distinction and Creativity Agency (DCA) reviewed on Saturday the preparations related to the National Championship of the World Robot Olympiad (WRO) for the year 2020. 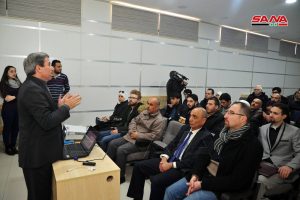 During its annual meeting, which included the coaches and the heads of robotics clubs in Syria, the DCA reviewed the conditions of applying for this championship and the mechanism for supporting the candidates in the framework of the agency’s initiative to support scientifically and financially the projects which will be participating in the Open Category competition, which will be launched this year to support scientific creativity and encourage the teams that would like to participate in this competition.

Dr. Muheib al-Nuqqari, the Head of Scientific Committee for Robotics in the DCA, said that the championship has been witnessing considerable and strong competition because of the increase in the number of participating teams year after year.

The DCA invited the teams wishing to participate in the Open Category to submit ideas for their projects and to sign up through the agency’s Facebook page till the date of Feb. 26th.

The WRO national championship will start in August. Hasaka, SANA-US occupation intensified the operations of stealing the resources of the Syrian people and …