Aleppo, SANA- Syrian Arab Army units liberated Khan al-Asal al-Rashidin 4 neighborhoods after operations against the terrorists’ gatherings and bases in it and in Khan al-Assal and Kafarnaha, completing the liberation of the eastern side of the Aleppo/Damascus International Highway.

SANA reporter said that Army units carried out concentrated operations against the terrorists of Jabhat al-Nusra and the groups affiliated to it in al-Rashidin 4 neighborhood and in the western outskirts of Aleppo city, which resulted in defeating the terrorists in the western countryside and killing a lot of them.

At the same time, other Army units continued to bolster their deployment in the surroundings of the Aleppo/Damascus International Highway, specifically in al-Zarba and ICARDA, after liberating them from terrorism.

The Army also repelled to a big attack by terrorists supported by Turkish occupation forces in Idleb countryside in the surroundings of al-Nairab town west of Saraqeb town.

Meanwhile, a Military source said that at about 11,30 a.m. on Tuesday morning an army helicopter was targeted by a hostile missile over al-Nairab area in Idleb southern countryside where terrorist organizations, supported by Turkey, are positioned, leading to the fall of the helicopter and the martyrdom of its crew.

The reporter said that the Army destroyed a car bomb sent by the terrorists towards the Army units in the direction of the liberated town of al-Nairab in order to cause a breach, but the Army responded with the appropriate weapons and destroyed it before it could reach its target. 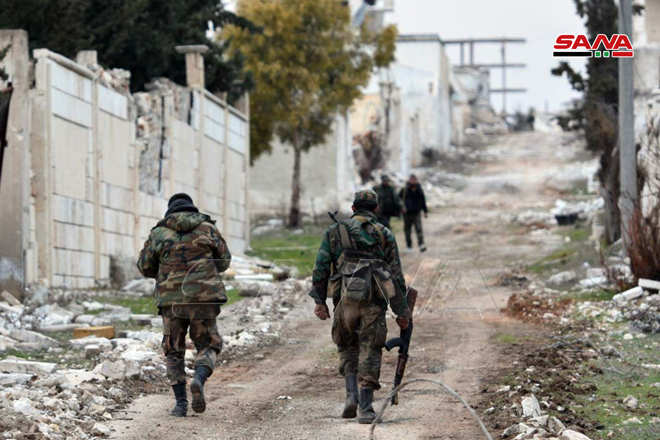 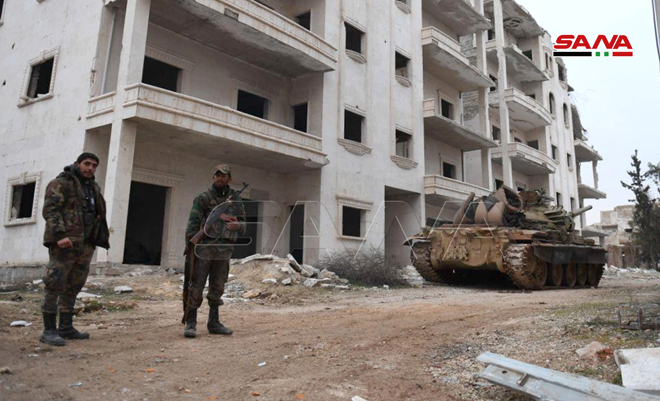