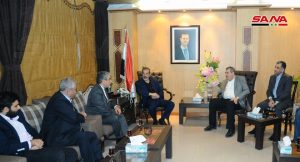 Talks during the meeting dealt with the situation of projects to be implemented in Syria, especially building mills, rehabilitating some of them, and expanding the exchange of food materials between the two countries.

Naddaf voiced the government’s keenness to develop economic relations and trade exchange between the ministries and institutions of the two countries in a way that contributes to facing US unilateral, coercive economic measures imposed against the two peoples.

For his part, Danaeifar affirmed his country’s commitment to implement the projects which Syria needs to cover the market requirements.