Damascus, SANA – President Bashar al-Assad on Tuesday chaired a meeting on the stages of implementation of the national project for administrative reform and what has been achieved in his regard.

At the beginning of the meeting, which was attended by Prime Minister Imad Khamis and a number of Ministers, the final draft of financial disclosure which will be reviewed by the Cabinet in preparation for passing it, as this role should have a positive impact on strengthening the values of integrity, equality, and transparency in institutes, which would help prevent corruption, curb illegal earning, and protect public funds.

Administrative Development Minister Salam Saffaf reviewed the results of the preliminary stage of the national project for administrative reforms at the Ministries of Local Administration and Environment, Public Work and Housing, and Finance, particularly in terms of human resources management, amending the organization and administrative structures, the problems that had been revealed during implementation, and means for addressing them.

Public Works and Housing Minister Suhail Abdellatif and Local Administration and Environment Minister Hussein Makhlouf reviewed the new organizational structure of their Ministries, which address the problems related to administrative inflation in old structures, as well as the results of evaluations for workers in central departments and the training courses which will result from them in order to improve work quality and efficiency and achieve optimal use of available human resources. 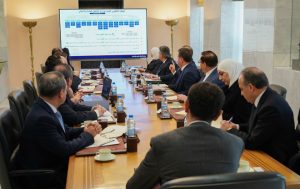 President al-Assad gave instructions to begin applying the preliminary stage of the administrative reform program in the rest of the Ministries concurrently according to the steps employed in the three aforementioned Ministries, as well as focusing on a number of main points that raise work efficiency at public establishments and achieve optimal investment in the human resources that are available at these establishments and that would join them in the future.

These points include setting just criteria for holding job competitions after setting a map of human resources, vacancies, and job descriptions by the public establishments; reducing the number of Assistant Ministers along with the inflated administrative structures, particularly in administrative support departments, which leads to a decrease in the performance of establishments and increases spending; and addressing problems in the staff numbers of ministries based on analyzing the workforce.

The meeting was attended by the Health Minister, Social Affairs and Labor Minister, the Chairman of the Planning and International Cooperation Commission, and the Secretary of the Cabinet.