Sweida, SANA- Sweida National Museum represents a living witness on the deep-rooted archeological antiques in Sweida City, and it is a cultural landmark that includes busts, basaltic statues, mosaic paintings and antiquities dating back to different historical eras.

The museum which was built on Sweida-Qanawat road consists of a main entrance in its western side and a foyer designed in the shape of Arabian guest room “Madafa”, a reception center and a guard center, in addition to several halls which embrace antiques dating back to prehistoric eras. 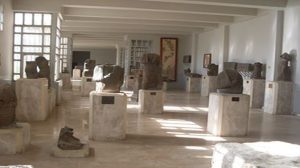 Kiwan added that the museum also includes a department for languages and  ancient inscriptions, and a hall for folkloric traditions which depicts the traditions at al-Arab Mountain and the folkloric costume as well as the handicrafts in the city and the ancient local tools.

Various prehistoric flinty antiques and crockeries belonging to the ancient bronze and medieval eras, and mosaic paintings recently unearthed in Sweida and Shahba cities are also showcased at the museum, in addition a basalt-made statues of Roman and Nabatean Gods and busts for men and women and rocky friezes and eaves decorated with human, animal, vegetable drawings.

Inside the museum, one also can see lintels of Roman and Nabatean doors, and pottery-made antiquities, as well as gold and bronze Roman, Byzantine and Islamic coins and funerary sculptures and Byzantine tombstones.

At the Prehistoric Department in the first hall, the visitors of the museum can see display cabinets in which prehistoric flinty tools which have been unearthed at the site of Khirbet al-Mabashi are showcased, in addition to a rocky piece discovered in al-Hibaraya site and it was made of volcanic slag which was mixed with animals’ bones.

Crockeries dating back to the Ancient Bronze Age 3000 B.C. which had been discovered in Zibin town are also displayed at the Prehistoric Department. 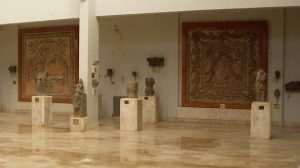 Meanwhile, at the Economic Life Department, one can see a group of basaltic sculptures which date back to the Byzantine era and important parts of the houses and temples which had been built by the Nabateans, in addition to display cabinets that include a number of the potteries and human faces carved on basalt stones.

The walls of the hall are decorated with colorful paintings for sites at the archeological sites of Khirbet al-Ambashi and al-Dayyatha, in additions to photos for archeological sites dating back to the Chalcolithic “stone or Copper” Age and the Bronze Age, and for ancient water channels as well as land reclamation and grapes cultivation in the Nabatean and Roman eras.

Kiwan indicated that the second hall at the museum represents the Roman Age as it contains basaltic sculptures for horses and eagles of different shapes and some of them are surrounded by snakes and under these eagles, one can see two men, in addition basaltic busts of legendary animals such as the Phoenix which is a long-lived bird that cyclically regenerates or is otherwise born again. Associated with the sun, a phoenix obtains new life by arising from the ashes of its predecessor.

The second hall also showcases a large number of alters of different shapes and sizes and on some of them there are Greek inscriptions and a number of eaves and lintels of doors decorated with human, animal and vegetable shapes which express beliefs and legends which spread in this region, in addition to a colored painting which includes photos for a number of the temples such as the temple of the Sun God in Qanawat and the temples of   Atil and Salim.

At the third hall, which is located under a dome at the center of the museum, there are six mosaic paintings which have been unearthed in Shahba, and they represent the most beautiful showcased antiques in the museum.

The third hall also includes basalt-made sculptures for the Gods which were worshiped in the Roman Age such as Victory Goddess and a bust for Athena Goddess as well as a part of Hercules sculpture and busts of Jupiter Ammon God and of Helios (God of the Sun), and basaltic sculptures for women with combed hair and for bearded men.

In the fourth hall, there is a number of basaltic sculptures dating back to the Byzantine Age which represent architectural sculptures and decorated carvings and a mosaic painting of the Monk Sergius which was unearthed at the Great Church in Sweida. 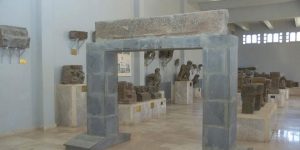 Inside the hall, one also see funerary sculptures with ancient Greek and Nabatean inscriptions on them. Those sculptures were found in al-Rashida valley.

Meanwhile, at the Islamic Age Department, the visitors of the museum can see a group of the basaltic and pottery-made sculptures, as well as Arabic inscriptions and three display cabinets that showcase gold, silver and bronze Islamic coins from the Umayyad reign, and crockeries dating back to the Early Islamic Age, and the Ayyubid and Mamluk reigns, in addition to colorful paintings reflecting the development of the Phoenician alphabet.

A garden surrounds the museum from three directions. This garden represents an-open air museum with what it contains for monuments and antiques such as basaltic sculptures which include those of the Gods and individuals, in addition to eaves, friezes, lintels, decorated doors, windows, niches and alters, mostly dating back to the Nabatean and Roman ages.