Damascus, SANA- Under the patronage of Mrs. Asma al-Assad, the winners of the Syrian Science Olympiad for the 2019-2020 season were honored in a ceremony held at the Conferences Palace in Damascus. 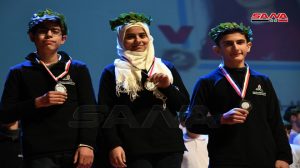 The ceremony, organized by the Distinction and Creativity Agency, honored the top 15 students in mathematics, physics, chemistry, informatics, and biology. 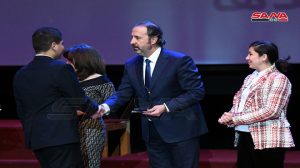 In biology, Bassel al-Kanjo from Aleppo came in first, Aya Ibrahim from Lattakia came in second, and Mohammad Alaa Kebrit from Homs came in third.

In a speech at the ceremony, Chairperson of the Distinction and Creativity Agency Hala al-Daqqaq said the Agency’s future plans seek to develop training methodology for students, as well as participating in international competitions in new fields such as nanotechnology and mathematical modeling next year.

The ceremony included screening of videos of the Olympiad finals and the vision for developing the Syrian Science Olympiad, in addition to musical performances.