Hasaka, SANA- Following the deployment of Syrian Arab Army units in the northern countryside of Hasaka province and restoring security and safety to the area, a state of comfort prevailed among locals of Hasaka countryside which has been reflected through their return to their homes after years of suffering, pain and fear due to the continued threats and aggression by the Turkish occupation’s forces and its mercenaries of terrorist organizations which have forced thousands of them to leave their homes and areas heading towards the cities of Hasaka and Qamishli.

Director of the Social and Labor Affairs Department Issam al-Hussein told SANA in a statement that the number of civilians who have been displaced from the northern countryside of the province due to the aggression launched by the Turkish regime and its mercenaries have witnessed a continued decrease due to the return of the locals to the areas where units of the Syrian Arab Army have been deployed in the countryside of the province. 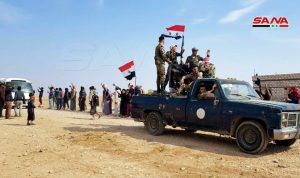 Thousands of displaced people have returned gradually to their areas as the number of the displaced people dropped to 41,000 mostly from the locals of Ras al-Ayn and its surroundings where the forces of the Turkish occupation’s forces and its mercenaries of terrorist groups are positioned.

SANA’s camera accompanied Syrian Arab Army units during their deployment process in Hasaka countryside, and it has kept pace with the return of normal way of life to all areas where the army deployed its units and the people returned to practice their daily work.

Meanwhile, the locals of Ras al-Ayn town, which is considered as one of the richest agricultural areas in the province and which is famous of cultivating wheat, barley, vegetables and cotton have started to cultivate their lands after the Syrian Arab army restored security and safety to their areas.

Syrian Arab Army started to deploy its units on October 13th in the Syrian al-Jazira region and regained control over a number of villages and towns in Raqqa northern countryside and Aleppo, while the army units completed on 14th of December their deployment along the borders with turkey starting from Ras al-Ayn northeastern countryside till Ayn Diwar in Malikiya countryside over a length of 200km.