Rome, SANA_ Syria participated in meeting of the Parliamentary Assembly of the Mediterranean (PAM) which kicked off  in Rome on Friday on combating terrorism.

The agenda of the meeting included several topics related to evaluating activities of the Assembly with its main partners on the issue of fighting terrorism, strengthening border security measures, exchanging information, the problem of foreign terrorists and their repatriation in addition to the importance of enhancing solidarity with victims of terrorism.

Syria’s speech, delivered by Secretary of the People’s Assembly Rami Saleh, the head of Syrian delegation, stressed that terrorism represents a great challenge and a threat that not only targets Syria but countries of the world as a whole.

Saleh underlined that the fight against terrorism begins through the development of clear legislations and relations between countries based on mutual respect. 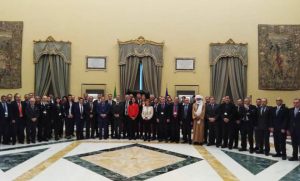 He pointed out to the law approved by the People’s Assembly on combating terrorism.

Interposition of the Syrian delegation focused on the seriousness of the phenomenon of electronic terrorism from which international terrorism benefited in marketing its criminal acts, in addition to satellite stations that spread extremist ideology, stressing the need to coordinate with the United Nations to enhance the ability of countries to fight all forms of terrorism.

The interposition also stressed that terrorism wouldn’t be able to continue without the support and funding of some countries such as the Turkish regime, Western countries, and the Israeli Zionist entity, calling for an international confrontation to such behaviors that back terrorism and for international solidarity to fight terrorist through science, dialogue, tolerance and enhancing coexistence among citizens in all countries of the world

On the sidelines of the meeting, the Syrian delegation met with the Palestinian and Algerian delegations, President of the Parliamentary Assembly of the Mediterranean PAM Dr. Alia Buran, he Secretary-General of PAM, Sergio Piazzi, and Chairman of the PAM Standing Committee on Combating Terrorism, Gennaro Migliore.

The delegation explained the reality of terrorism to which Syria is exposed and the great victories achieved by the Syrian Arab Army in combating it as well as the unilateral coercive measures imposed on the Syrian people.