Tehran, SANA_ Minister of Public Works and Housing Suhail Abdullatif and Iran’s Minister of Roads and Urban Development Mohammad Eslami on Tuesday inked the executive program of Understanding memorandum signed earlier between the two ministries during the 14th session of the Iranian-Syrian Higher Joint Committee held in Damascus. 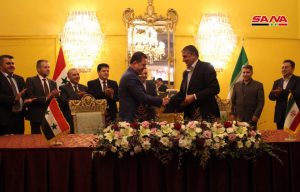 The executive program aims at enhancing bilateral cooperation, moving forward in the areas mentioned in the Memo inked between the two countries in the field of housing and public services in Damascus on 28/1/2019, carrying out joint cooperation projects and studying mechanisms of financing them.

The program also aims to provide the necessary facilitations to establish joint Iranian-Syrian companies for the purpose of reconstruction of housing units and the implementation of housing and public services projects in Syria in accordance with the laws in force in the two countries.

Setting up joint workshops for briefing on experiences of the two countries in related fields was also among objectives of the executive program.

Meetings of the Syrian-Iranian Joint Committee in the field of public works and housing started on Monday in Tehran to strengthen bilateral cooperation, especially in the field of construction. 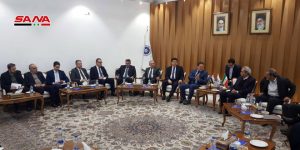 The Minister pointed out to the great opportunities for cooperation and investment in Syria in the housing sector, public works and the facilitations in this regard, in addition to the existence of investment opportunities in the areas of real estate development

For his part, Shafei emphasized willingness and readiness of the Iranian side and the private sector to participate in the reconstruction of Syria, where Iranian companies have high potentials and diverse technical and engineering expertise.

He indicated that opportunities for reconstruction in Syria have become available due to the prevailing of security and stability, hailing the victories achieved by Syria in the fight against terrorism.

A meeting was also held at the Chamber of Commerce, Industry, Mines and Agriculture included Minister Abdullatif, Iran’s Minister of Roads and Urban Development, Syrian Ambassador in Tehran, representatives of the governmental and private sectors in the field of housing and Head of the Syrian-Iranian Joint Chamber of Commerce. 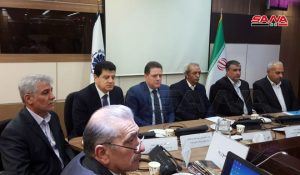 Abdullatif stressed the need to translate the inked Understanding Memo on the ground by finding joint Syrian-Iranian companies in the field of services, public works and housing.

Minister Abdullatif and the accompanying delegation, during the meeting, presented a detailed explanation through a video on opportunities of investment and real estate development in various Syrian regions.

Iran’s Minister of Roads and Urban Development stressed the readiness of the Iranian private sector with its technical and engineering capabilities to cooperate and invest in the housing sector in Syria and to participate in the reconstruction and development of Syrian infrastructure.

The Syrian ambassador Dr. Adnan Mahmoud, in turn, affirmed that the Understanding Memorandum between the Central Banks of Syria and Iran, which was signed during the 14th session of the joint committee held in Damascus, is being followed up to be translated into concrete steps either in terms of facilitating bank transfers between the two countries, dealing in local currency and linking banks. 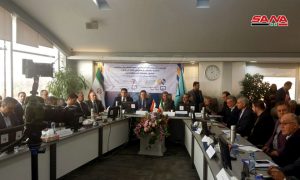