Lattakia, SANA_ With a charming artistic touch, Raouf Hanna Bitar from Lattakia province has spent 15 years among the woods which he gets from different types of trees to make distinguished mosaic paintings that narrate the story of the Syrian heritage as well as the deep-rooted civilization in its different shapes. 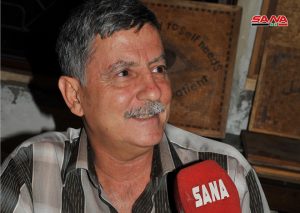 60-year-old Bitar, who spends several hours daily in his small workshop in Lattakia, told SANA reporter that he chose wood to carry out his artistic works and make mosaic paintings based on what researchers and archaeologists have documented showing the ancient Syrian civilization and its roots in history.

Bitar clarified that he consumed thousands of pieces of wood in the embodiment of figures, dating back to the fourteenth century BC and who had important roles in the history of the Levant.

He pointed out that his love for wood encouraged him to study its characteristics and know the most suitable types for his works including olives, apples, apricots, walnuts and berries.

The painting passes through many stages before coming to light, which the artist Bitar summarized as: identifying the idea and the quality of the wood that fits the painting, sorting out the wood pieces and then painting.

Patience, calm, accuracy and clarity of mind, according to Bitar, are most needed to complete the work of art.

Bitar began his artistic career 15 years ago. He participated in many local exhibitions and completed some paintings of the Latin Church in Lattakia. His works reached Egypt and a number of countries in Europe.

The wooden mosaic is one of the oldest and most distinguished traditional handicrafts in Syria.

The roots of this handicraft date back to the sixteenth century and it passed down through generations.

What makes the mosaic painting distinguished is the preciseness as to make it you need to prepare the required drawing and this is the first task as the work is done through drawing geometric shapes on the selected piece of wood.